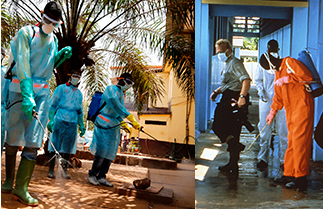 This image depicting clinic sanitary procedures was captured during the Kikwit, Zaire Ebola outbreak in 1995.

The disease is caused by infection with Ebola virus, named after a river in the Democratic Republic of the Congo (formerly Zaire) in Africa, where it was first recognized. The virus is one of two members of a family of RNA viruses called the Filoviridae.