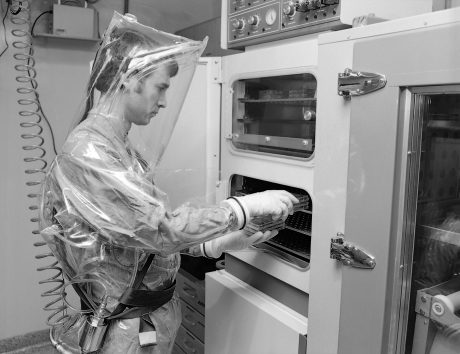 This 1978 photograph depicted Dr. J.V. Lange at a CO2 incubator that was located inside one of the CDC’s early Containment Laboratories, also known as BSL environments.

Dr. Lange is shown wearing a Maximum Containment suit while he was handling specimens containing pathogenic micro-organisms. The suit was air-tight, as they are today, and positively-pressurized in the event that there was a minor rupture in the suit’s integrity, which would force air out of the suit, instead of being sucked into the suit. The CO2 incubator was, and still is used when it’s necessary to maintain a controlled, O2 depleted environment in which specific micro-organisms will thrive, such as anaerobic bacteria.