When drafting the original call for papers that led to the ‘Prototyping cultures’ conference, we noted that the figure of the ‘prototype’ had recently emerged as a currency of explanation and description in a number of para-laboratory contexts: from classical industrial and engineering sites to contemporary medialabs, hacklabs, community and social art collectives, dorkbots and open collaborative workshops, online and offline. As we put it then, the notion of the experimental was witnessing a shift from knowledge-site to social process, with sociality and social exchange often becoming the limit-tests of experimentation itself. Prototyping, then, as both a means and an end of social reproduction.

Now if prototyping is no longer simply a modality of object-production or object-eventification, but a contemporary expression of how certain social relationships invest in their own self-understanding and self-elicitation, then it remains to be explained how such relationships conceive their own conditions of possibility. If we are no longer prototyping artefacts but societies, what makes in practice a good prototypical society?

Our paper for the conference aimed to offer a tentative answer to such a question. It was based on an ethnography of Medialab-Prado (hereafter, MLP), a critical arts and technology centre part of Madrid’s City Council’s Area of Culture. MLP has a strong commitment to the production of digital arts and technology prototypes. Its staff often refer to the centre as a space dedicated to ‘prototyping do-it-with-others (DIWO) forms of learning’. The prototype works therefore as a conduit or vehicle for the self-organisation of a community of practice and learning. The prototype as prototypical sociality.

Central to the organisation of such DIWO communities within MLP is the practice of ‘hospitality’. We use the term in its classic anthropological sense, as a technique for the negotiation of relationships between strangers (Candea & da Col 2010). Hospitality is indeed a term often employed by MLP staff to describe the centre’s atmosphere of conviviality. MLP works hard to establish itself as a hospitable environment. It employs, for instance, ‘cultural mediators’ whose responsibility is to welcome visitors (strangers) to the centre and walk them around the workshop space. Much work goes also into keeping a rich online archive with audio-visual and textual registers of all activities held at MLP, so that people who could not make it to the events (strangers?) may check the documentation at their leisure.

In our paper, however, we aimed to venture further by suggesting that hospitality worked too as a prototyping technique. At MLP the production of prototypes is sustained on the fragile accomplishment of hospitality as a prototype of sociality itself. In this new light, hospitality seems to require a complex array of socio-technical arrangements to organize its modes of sociality. We explored this techno-political agencement of the hospitable by drawing on a controversy triggered when MLP was designated curator of a giant digital façade built for the centre by the City Council. The façade was installed in a public square next to MLP. The management of such a public installation opened-up experimentation within MLP to a new scale of political visibility, social impact and technological complexity. Indeed, over the course of our ethnography, the façade stood as an index of MLP’s struggle for exploring what a methodology of experimentation might entail. 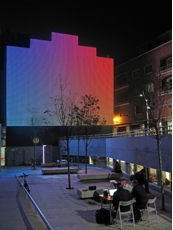 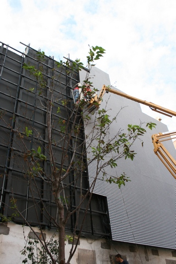 Tests with the Digital façade (Medialab-Prado).

A beacon of public visibility, the façade threw MLP into fraught terrain, where negotiating the complex articulations between public interventions and experimental modes of production became a prototyping challenge of its own. It compelled MLP to deal with the ‘publicness’ of the square – local neighbours, legislation on public spaces – as well as its techno-political modes of assemblage – undisciplined  hardware, weather conditions (the façade wont work during daylight). It became, too, a boundary object for competing artistic and political traditions: some saw in the façade a giant canvas for political expression, others saw it as an interface for exploring novel sociological relationships with local communities. The façade thus emerged not as a singular techno-infrastructural device, but the organon of an urban oikonomía(etym. household): a placeholder for negotiating domestic (that is, hospitable) arrangements across technical, political and social domains. 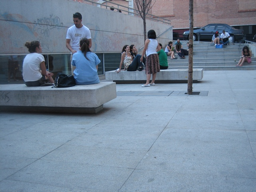 In light of our ethnography, we took Chris’ invitation to ‘prototype’ our own conference paper as an opportunity to explore what the prototyping of a paper’s hospitality might in turn look like. In her piece for this Episode, Marilyn Strathern recalls an experiment in designing a seminar series which, she argues, might rehearse something of the qualities of prototyping. What may be distinctive about prototyping as a social form, she says, is the uncertainty of relations that opening up a social process to strangers might yield. In her own words, ‘If prototypes seem on the increase, I throw into the ring the suggestion that one spotlight is shone where uncertainty is encountered in collaborative relations, and probably between relative strangers.’

If the organisation and production of academic knowledge – such as is evinced in a research seminar – entails opening-up a space for relations between strangers, as Strathern suggests, our effort centred on exploring the purchase of the very paradigm of stranger-relationality (i.e. hospitality) as a prototype for academic debate itself.

Thus, we rushed an experiment in prototyping academic hospitality. We published a copy of our talk in Medialab-Prado’s wiki and invited everyone who had registered for the conference to read and interpellate it. We hoped to prompt discussion and reflection on (at least) the following two issues:

(i) How does a paper ‘prototype’ new forms of relations between its hosts/writers and its guests/readers? It occurred to us that the hospitable prototyping of a conference paper (using a wiki and the rapid timeframe afforded by the experiment) might open-up interesting insights into the well-established notion of a hermeneutic and interpretative community of reading.

(ii) What gets prototyped in a conference’s paper? This was a question about the intimacy and openness of technology. In opening-up our paper’s entrails in a wiki and subjecting them to exposure we wanted to problematize the oikonomía of the academic occult: how much sneaking into one’s secrets – how much academic hospitality – can a prototype tolerate?

‘The stranger is also the beggar, since they both belong to the category of persons to whom hospitality is due. ’ (Pitt-Rivers 1968: 18) 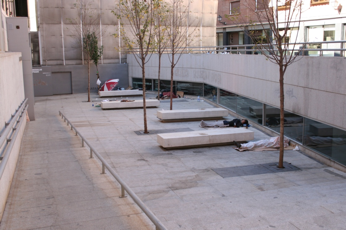 Let us conclude with an observation a propos the place of hospitality as an idiom for the re/production of prototypical relationships between strangers and their connections to a wider oikonomía of knowledge. In his well-known article on ‘The house of experiment in seventeenth-century England’, Steve Shapin described the social space of science as a domestic environment of genteel and trustworthy relationships (Shapin 1988). Back then there was no distinction proper between places of residence and places where scientific knowledge was made. The conditions of hospitality observed in the former shaped and inflected the credibility of knowledge produced in the latter. The modern laboratory, in contrast, is a space of extreme strangeness. Non-scientists have no rights of access to the environs of science, and ‘when we make the occasional trip to places where scientific knowledge is made… we come as visitors, as guests in a house where nobody lives.’ (Shapin 1988: 404)

Our foray into the modern culture of prototyping aims to link back with Shapin’s historical analysis in order to suggest that as a figure for our contemporary, ‘the house of prototype’ may be emerging indeed as an adequate description for a new paradigm of knowledge-production: where hospitality is taken to frame the conditions of possibility of new knowledge.

Pitt-Rivers, J. 1968. The stranger, the guest and the hostile host: introduction to the study of the laws of hospitality. In Contributions to Mediterranean sociology: Mediterranean rural communities and social change (ed.) J.-G. Peristiany. Paris and The Hague: Mouton & Co.