At the end of the great credit bubble there was still a tremendous amount of borrowing potential in the hands of consumers.  Of the $5 trillion in US credit card lines outstanding only $800 billion was reportedly in use.  So in the spring of 2009, with unemployment and bankruptcy on the rise, the card companies started to purge their books of plastic.  Lenders began unilaterally closing unused accounts in a furious attempt to control costs and reduce exposure.  They also began ‘balance chasing’, the practice of systematically trimming down credit line limits as debts get paid off.

Suddenly, through no fault of their own, US consumers with strong credit ratings started seeing their scores slide down the chute.  When a lender decided to close a card or cut a line, an individual’s overall credit limit was lowered, and the ratio of line to limit use was instantly increased.  This in turn lowered their FICO® credit bureau score, sometimes by more than 50 points. As lenders reabsorbed lines in the transition out of a credit soaked environment, the credit ratings these lines were supporting also deflated.  What dropping FICO® scores indicated was this: as credit contracted, the credit risk within the system was increasing.

FICO® is not just an observation of credit risk. It is also a tool that is actively used to manage credit accounts. So the crushing involuntary landslide didn’t stop at the scores. Following the fine print in card contracts, decreases in ratings triggered ballooning interest rates from as much as 7.99% to 28%, even on accounts where no action had occurred. Not only was less credit immediately available, but the affected consumers who had yet to default on a payment were now facing higher monthly payments on multiple cards, an accelerated accrual of debt, and a compromised position in the markets because of a weakened score.[1]

The process of credit contraction – initiated by financial institutions and propagated by plunging scores – has exposed FICO® as an important machinery of market feedback and control. FICO® mediates the risk management decisions of numerous independently acting firms whose collective activities feed into macroeconomic phenomena. What is the system of consumer finance? What are its constituent parts and how are they connected?  The answer is through FICO®.  The heart of consumer finance is a machine that produces trademarked risk information. What credit contraction shows is that the systemic quality of US consumer finance and the use of this information system are one and the same.

This raises the question of systemic risk. In finance, systemic risk has traditionally referred to the possibility that a loss incurred at one banking institution could propagate outwards, unleashing a chain of events through which the financial system as a whole would fail.  Systemic risk should not be conflated with an economic downturn or dramatic losses[2] that are natural parts of what is at stake in financial activity.  Rather it is concerned with the catastrophic loss of functioning in the system of finance itself, thought to be triggered by an event occurring within a single firm (The classic trigger in this model is a bank run.).

The rise of global capital markets, however, complicates this picture. Within capital markets the number of actors at play proliferates to include alternative institutional intermediaries, financial instruments and transactional ties that fall outside of banking relationships. The nature of the system that is at risk becomes much more amorphous once its components are not limited to a discreet category of agents such as banks. The domino effect is overwhelming evidence of profound interconnectedness within capital markets. By the same token, however, the freeze has made systemic risk the object of regulatory scrutiny at precisely the moment when it is most difficult to map out the markets’ heterogeneous parts.

I would like to draw attention to two observations raised by this contraction in order to parse out a relationship between ‘system’ and ‘risk’ that is significantly different from described by the traditional institution-based model of financial action and financial regulation.  The first is that actionable risk in consumer credit markets is constituted within a material infrastructure for calculating credit scores. The risk of default is issued from this proprietary machinery and can only be seized and acted upon by agents interacting with this material apparatus. The second is that the routine exercise of the logic of risk versus return carried through the signs emitted by this machine creates instability at the macroeconomic level. 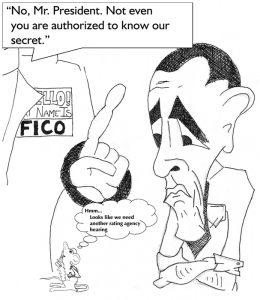 A FICO Cartoon demonstrating power and secrecy at work

This suggests that FICO® should be considered a key location of political intervention. If systemic risk implies the threat of an event that could disrupt widespread consumer economic participation, and if risk scores are to play a pivotal role in how that event unfolds, then the way to manage systemic risk is to mitigate the trigger at the level of the risk assessment machine.  The purpose of intervention would not be to treat any permanently resolvable flaw within FICO®.  Rather intervention would address the fact that by its very capacity to coordinate widespread financial action, FICO® is capable of generating conditions that are crises from the point of view of lived experience and political objectives.

It is noteworthy that neither FICO® itself as a technical system, nor the logic of action it promotes are placed in jeopardy by the politicization of these conditions. As regulators embrace the concept of risk and identify the distributed effects of risk-based activity as the new objects of regulatory control, it is arguable that they are only promoting the historical transformation towards a greater preoccupation with risk that the invention of FICO® announces. Thus, I would argue, in finance the nature of systemic risk is shifting.  It is no longer refers to the threat of widespread dysfunction posed by a single institution.  It is now the effect of having engineered material systems for producing risk information that serve as contemporary organizational forms.