The notion of resilience has become increasingly salient in recent decades in fields ranging from public health preparedness to critical infrastructure protection. As Benjamin Sims has noted, the use of the concept of resilience to indicate a norm that critical systems should strive for comes from the field of systems ecology – specifically from a seminal 1973 article by CS Holling.[1] In Brittle Power, Amory and L. Hunter Lovins provide a key example in their call to “formulate the principles of a design science of resilience.” They attribute their debt to those “who study the survival and stability of ecosystems,” and particularly “the Canadian Ecologist Professor C.S. Holling.”[2] In this essay I explore the meaning and intellectual lineage of Holling’s concept of resilience.

In his 1973 article, Holling contrasts approaches emphasizing the dynamism, complexity, and unpredictability of nature with a more widespread view emphasizing the stability of nature.[3] In foregrounding a comparatively narrow range of relations between populations of predators and prey, the latter approach overemphasizes the durability of supposedly stable equilibrium relations and obscures other kinds of relations. By contrast, an approach based on resilience is more open to the dynamism and complexity of the natural world. This openness allows ecologists to recognize the systems in nature that can survive disturbances, if often in different forms. A stability-based model returning to equilibrium after a disturbance (Holling 1973: 3).

In addition to this emphasis on dynamism and complexity, his article is striking for the degree of abstraction with which it describes phenomena in nature. Instead of details about populations of plants or animals at a specific field site, the reader encounters hypothetical models of predator prey relations represented as “trajectories in the phase plane.”[4] Although its attack on equilibrium-based approaches occupies the core of Holling’s argument, underlying this argument was the assumption that the world is a place made up of abstract systems. Where did this notion come from and how did it occupy the place of an assumption in Holling’s article?

In order to answer this question, we need to examine the formation of systems ecology as the milieu from which Holling’s article would emerge. Materializing in the mid to late 1960s, systems ecology is known for fusing an inclusive, holistic approach with a comparatively intensive reliance on mathematics and the use of computers to model ecosystem dynamics in all of their complexity. In noting that training in mathematics and biomathematics would help ecologists move more easily “across the gap that separates the real world from the world of mathematical abstraction,” systems ecologist Kenneth Watt draws attention to one of the core features of this form of ecological research—its reliance on abstraction to describe key processes in nature.[5] While these ecologists would puzzle over questions such as how many of nature’s variables to include in their models of a given system, the notion that nature was a place composed of systems was something was no longer discussed as it had become an assumption according to which research in systems ecology made sense.

The formation of this field—along with its central assumption, that nature is made up of systems—would be an important condition of possibility for Holling’s notion of resilience. As ecologists reached for the language and tools of cybernetics in the late 1940s and systems analysis in the 1960s, they would also define nature in the increasingly abstract language of systems. In these two moments we can see an early and somewhat tentative search for systems in nature culminate in the assumption that nature itself was made up of systems. The relevance of the history of the field to Holling’s 1973 article runs deeper, however.  In addition to this form of systems-based abstraction, Holling’s article also bears the mark of the field’s early efforts to define itself against population ecology in its emphasis on dynamism and complexity.

In drawing on the language of cybernetics, ecologist G. Evelyn Hutchinson’s description of the cycles through which matter moves through the environment as self-regulating represents an early effort to find systems in nature. He depicted these ‘circular causal systems’ in a talk that was delivered at a New York Academy of Science conference that was themed on cybernetics and took place immediately after the second Macy Conference in 1946.[6] Faced with a variety of cycles of different kinds of elements often in different settings, Hutchinson isolated and described the key ecological process shared despite all of these differences. Further, he did it using the same vocabulary other conference participants were applying to a proliferating array of problems.[7] Nonetheless, as a field defining itself as more inclusive but also reliant on complicated mathematical models, the prospect of modeling in a more inclusive way an object that was so complex represented a formidable challenge. The level of complexity (now methodological) introduced by stripping away the simplifying assumptions of population ecologists would prove intractable for the traditional tools of ecology. In a 1966 volume that served as a rallying cry for the emerging field of systems ecology, Kenneth Watt boldly answered this dilemma. Ecology should incorporate the tools of systems analysis as a field that is used to dealing with complexity. Ecologists should use computers to run simulations but also to process the increased number of mathematical equations coming from incorporating nature’s complexity.[10]

In his contribution to Watt’s 1966 volume, Holling shares Watt’s interest in using the terms of systems analysis—of positive and negative feedback, computer simulation, and approaching key processes of interest as systems—to describe nature. The differences between the 1966 and 1973 articles are instructive, however. By 1973, Holling was no longer focused on making a case for systems analysis so much as basing a paradigm shift in the study of populations that presumed the value of the field’s approach. He opens his 1966 essay by noting that in the face of the onslaughts of man, “nature has proved to be remarkably resilient.”[11] In his 1973 article on resilience, he assumes the reader will similarly value a focal point centered on “the behavior of systems.”[12] In this article it is the systems that make up nature that are resilient in the specific sense that the article defines—not nature as he described it in 1966, in the language of an emerging environmental movement. 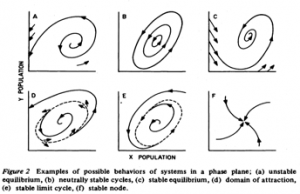 Hypothetical patterns of the behavior of systems of predators and prey (Holling 1973: 4)

By 1973, Hutchinson’s search for systems in nature had become the assumption that nature was a place made up of systems. This shift, a move towards abstraction and reliance on the vocabulary of systems, is a precondition of Holling’s notion of resilience. Before a system could be more or less resilient, there first had to be the assumption that nature was made up of systems. Further, we can see the field’s struggles of self-definition echoing forward into Holling’s 1973 article. His attack on the emphasis on stability is also (following Watt) an attack on overly simplistic approaches in population ecology.

If, as I have suggested, understanding the milieu of Holling’s 1973 article is an important step in understanding the notion of resilience, then its subsequent uptake by analysts interested in systemic risk suggests questions about the extent to which this more recent, less ecological milieu might have re-shaped resilience as a target of intervention.