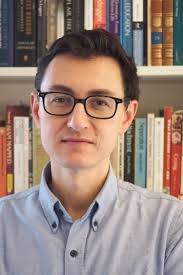 Etienne Benson is an Assistant Professor and historian of the environmental sciences, environmentalism and human-animal relationships in the 19th and 20th centuries in the Department of History and Sociology of Science at the University of Pennsylvania. His book Wired Wilderness: Technologies of Tracking and the Making of Modern Wildlife (Johns Hopkins University Press, 2010) showed how the use of electronic surveillance technologies to study and manage wildlife in the United States since the 1960s challenged widespread understandings of wildness and wilderness. He has also published shorter studies of urban squirrels, national parks, environmental satellites, electric power transmission, animal history, endangered species protection, movement ecology, ecological simulation and other subjects. He is currently pursuing two book-length projects: one tracing the history of environmental ideas and environmentalisms since the late 18th century, the other exploring the role of the built landscape in generating ideas of human-animal difference. At Penn he teaches courses on the history of technology, environmental history, and posthumanism.