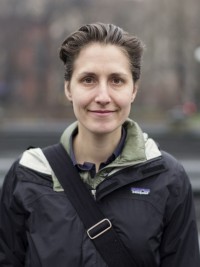 Nicole Starosielski’s research focuses on the global distribution of digital media, and the relationship between technology, society, and the aquatic environment. Her book, The Undersea Network, examines the cultural and environmental dimensions of transoceanic cable systems, beginning with the telegraph cables that formed the first global communications network and extending to the fiber-optic infrastructure that carries almost international Internet traffic. Starosielski has published essays on how Fiji’s video stores serve as a nexus of digital media access (Media Fields Journal), on Guam’s critical role in transpacific digital exchange (Amerasia), on the cultural imbrications of cable systems in Hawaii and California (Journal of Visual Culture), and photo essays on undersea cables (Octopus and Media-N). Before coming to NYU, she taught at Miami University of Ohio. She received her Ph.D. from UC-Santa Barbara.