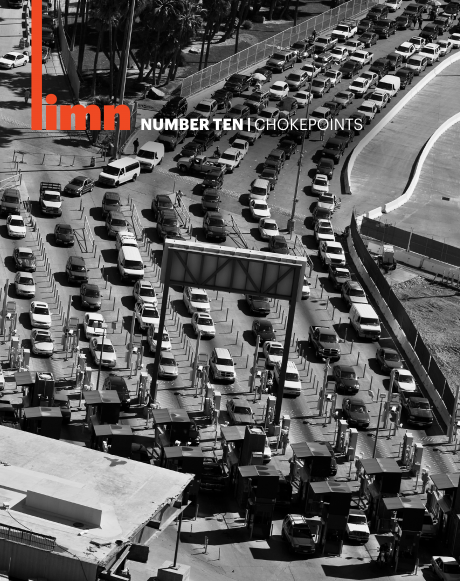 April 2018: Migrants gather in “jungles” at the mouth of the Chunnel, awaiting an opportunity to cross from mainland Europe into the UK undetected. Somali pirates attack ships queuing up at the Bab-El-Mandeb strait, a critical passage between the Indian Ocean and Mediterranean Sea. A flash crash in the stock market triggers a digital “circuit breaker” that instantly shuts off digital trade until cooler heads prevail. Transcontinental internet connectivity is funneled through bundles of undersea cables, making global information flow susceptible to disruption by something as minor as a misplaced ship anchor. These tunnels, corridors, and cables illustrate how some conduits can become chokepoints, sites where malfunction, blockage, or strategic pressure constricts—or “chokes”—the flows and connections upon which contemporary life depends. Limn 10 brings together anthropologists, geographers, photographers, media scholars, sociologists, ecologists, and historians to explore chokepoints. We ask: When and why do these sites of constriction and connection emerge? How and for whom do they work? And what do chokepoints reveal about the the past, present, and future?