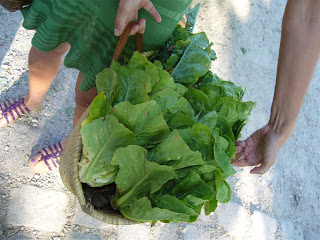 Like every Thursday afternoon, Celine’s two kids are exited, because Thursday is the jour du Panier (“basket day”). At 6 p.m., Celine and her two children meet other amapiens to receive their weekly basket of vegetables from La Ferme du Soleil. Pierre, the farmer from La Ferme du Soleil, is perfectly on time as he is every week, despite the fact that his farm is 15 kilometers from downtown. He unloads his cases of zucchini, lettuce, eggplant, cucumbers, and tomatoes, while Marc, who is in charge this month of the distribution, starts to count and weight the production to calculate how much of each vegetable each member of the Association pour le Maintien d’une Agriculture Paysanne (AMAP; similar to community-supported agriculture groups [CSAs] in the United States) will receive in his/her basket. Once he writes the contents of each basket on a sheet of cardboard, Cecile’ kids start their favorite activity: taking from Pierre’s cases the vegetables. This week it is three heads of lettuce, three eggplants, two kilos of tomatoes, two cucumbers…and three more kilos of zucchinis, a good occasion for them to tease their mother. This is the peak of the zucchini season, and Cecile really starts to get short on ideas for how to cook these vegetables. This became a subject of joke between the amapiens of La Ferme du Soleil, who exchange recipes to cope with the bumper crop!

Since the turn of the twentieth century, numerous new food provisioning systems have mushroomed in various Western countries, including fair trade, organic co-ops, small-scale farming, grass-fed meat, direct selling, cow share contracts, CSAs/AMAPs, and local food on restaurant menus (Dubuisson-Quellier 2013a). These initiatives receive extensive media coverage because most originate from a critical perspective fueled by anti–mass-consumption movements such as the antiglobalist, environmental, or social justice movements. They are generally presented in opposition to industrial food systems. But I would argue that the industrial and alternative systems in fact support each other.

Alternative food movements blame industrial agro-food systems for social injustices such as impoverishing small producers and for environmental damage such as polluting soil and decreasing biodiversity, as well as for cultural effects such as the homogenization of tastes and products. The issue of scale is at the core of these social critiques. According to the claims of these social movements, agro-food systems are organized through huge businesses. Long supply chains from farms to retailers that rely on specialization and concentration benefit from the effects of these large scales. As a consequence, consumers ignore or cannot see the social, economic, and environmental damage that these food systems cause. For the promoters of alternatives, scaling food systems down increases consumer awareness and reduces pressure on producers and the environment.

These alternative food systems shorten the geographical and organizational distance between producers and consumers. For example, fair trade operators draw small producers from the south to the attention of consumers from the north through diverse communication devices. Although the physical distances between the two types of actors remains large, the nongovernmental organizations (NGOs) involved in fair trade try to create a solidarity that is supposed to shorten these distances. In the case of CSAs, the idea is also to bridge consumption and production by organizing contractual systems between farmers and purchasers, who receive weekly baskets of fruits and vegetables that they have paid for before the start of the harvest season. The contract is supposed to organize solidarity between upstream and downstream actors in the supply chain, making the consumers more aware of farmers’ risks and exigencies. Farmers’ markets or local and organic co-ops also depend on proximity and small family farming. They posit that not only should distance be decreased, but also that the scale of production should be downsized. Across all these alternative food systems, small-scale becomes a motto and an approach in opposition to huge globalized food systems (Weber et al. 2008).

This polarized vision might have some rhetorical virtues for those who promote alternative food systems, but both systems are in fact intertwined, giving life to a moving process through which food systems are constantly evolving, regenerating, and—most important—internalizing the social critiques they face. Therefore, it might be more appropriate to analyze scaling as a process rather than considering scales as fixed and rigid features of food systems.

Let’s take, for example, what is happening in France around the phenomenon of alternative food systems. Neither producers nor consumers evolve in a closed world of either large-scale or small-scale food systems. Most consumers who are members of an AMAP do not stop shopping from big retail companies. They usually use have diverse provisioning strategies. And producers have multiple retailing strategies; although most specialize by selling only through an AMAP, a few of them also adopt other direct-selling strategies through a producer shop, a farmer’s market, or online delivery. Moreover, some farmers who sell directly from the farm may continue to work with big producer organizations, retailers, and wholesalers. Thus, in these two supposedly separate worlds—one for small farmers directly selling to activist consumers, and the other with big farms and retailers selling to mass consumers—actors in fact allocate their choices in a plurality of ways, composing heterogeneous food systems.

The price setting within most AMAPs is also illuminating. The code of conduct that is supposed to rule the different local contracts says that the price of farm shares should reflect farmers’ production costs to oppose and contest the tendency of globalized food systems to lower prices to capture mass consumption. The AMAP system intends to help farmers live decently from their work by setting prices that cover their real costs. But, in fact, it is very difficult for a small farm to calculate their production costs for each of its products. Doing so would require farmers to calculate the time they allocate for each of their interventions on each crop: seeding, monitoring, watering, harvesting, etc. In small-scale farms, where a single farmer does everything, this can be known only very approximately. And even though some farmers would be able to calculate it (thanks to a profound passion for cost accounting!), the cost would not mechanically set the price. In fact, like most other economic actors, most AMAP farmers set prices according to those of their nearby competitors. They use prices from supermarkets, organic co-ops, other AMAPs, or farmers’ markets to decide the prices of their basket. As one farmer told me, “Well, I do not want to compete too much with the co-op that offered to deliver my baskets in front of its shop!” AMAPs are not out of the market but part of it, interacting with other food systems. As a consequence, alternative food systems should not be considered as operating in a separate world from other supply chains, but simply as part of a general food system.

One might argue that, yes, they are alternative and different because they operate on smaller scales. But actually, the scaling is a process rather than a feature, both because small and large operators interact and because these operators evolve. Some operators in alternative food systems are considering scaling up since they face a surfeit of success among consumers. For example, most of the AMAPs have waiting lists of consumers who want to be members but cannot enter since the farmer cannot (or does not want to) produce more. Even though each group should not exceed a certain number of families (40 is common), some groups have become even larger. Indeed, the demand substantially exceeds the supply; because farmers are lacking, some of them expand or associate with others to deliver to larger groups of consumers. These increases in scale create debates within the AMAP communities.

Within the fair trade world, scaling up became a big issue at the beginning of the twenty-first century with two of the main historical operators in France. While Artisans du Monde, one of the oldest fair trade NGOs, refused to contract with big retailing companies, the Max Havelaar association decided scaling up was the only suitable way to reach more consumers, arguing that doing so could ultimately convince supermarkets to change their practices. In reality, this debate about scale hid a more profound opposition between the different business models and conceptions of the role of consumers in these alternative food systems. Since Max Havelaar earns money from the royalties it receives from the brand that uses its labels on their packaging, it is trying to reach a greater amount of consumers, even if they are only occasional consumers of fair trade products. But Artisans du Monde earns money from its own retailing and wholesaling activities. It considers sales of fair trade products as a means rather than an end, to reach consumers and deliver complete information about social justice issues. As a consequence, scaling up was not as important as making sure that consumers become proselytes of the cause. Thus, what is at stake in questions of scale in alternative food systems is in fact the nature of the collective action in each alternative food system as well as the economic considerations they face as market operators.

At the same time, one has also to understand that operators who are traditionally associated with the globalized industrial agro-food system are beginning to see alternative food systems as business opportunities. In France as in other countries, supermarkets and manufacturers may have at first ignored fair trade, local food, direct selling, and other alternative systems as piteous competitors. But they progressively changed their minds. In the food sector, where markets are largely saturated, fair trade, organic products, and local food have become new and profitable market niches. Many manufacturers have developed organic, fair-trade products or “made in France” products, while retailers have developed local supplies. Sourcing activities thus increasingly merge large-scale and small-scale systems.

Of course, this fine intertwinement between different scales produces frictions in markets and in social movements. Resource partitioning theory posits that markets may be separated between a few dominant large-scale and highly concentrated generalist companies on one side and, on the other, small-scale entrepreneurs supported by identity movements and nourished by anti–mass-production sentiment that resists homogenization. This is the case for microbreweries (Carroll and Swaminathan 2000), independent bookselling (Miller 2006), and alternative media (Greeve et al. 2006). But such partitions can in fact be rather blurred when small-scale operations cease to be constitutive of identities.  This is increasingly the case in the organic food industry, in which operators can be both small and large (Sikavica and Pozner 2013). This phenomenon accounts directly for the capacity of social movement organizations to operate as real market actors (Dubuisson-Quellier 2013b; Lounsbury et al. 2003), and of the market to endogenize their critics (Boltanski and Chiapello 1999). Both of these mechanisms are part of the dynamics of food systems.